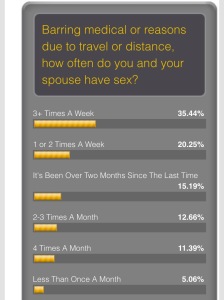 Well, the results are in. For the month of November we ran an intimacy poll to see where married couples fall into the frequency of sexual activity. We asked the following question: “Barring medical or reasons due to travel or distance, how often do you and your spouse have sex?”

Kerry and I were amazed at the responses. We had 1092 votes and here are the results.

35.44% of those polled, 387 couples, stated that they are very active in their sex lives. There are experiencing intimacy at least 3 or more times a week. That could be understood to be every other day or more.

20.25% of those polled, 221 couples, stated  that they have sex at least once or twice a week.  With those initial numbers, it is evident that the majority, 55.69% or 608 couples are actively seeking intimacy at least once a week or more.

15.19% of those polled, 166 couples, stated that it has been over two months since they were intimate with one another. After the first two groups, this is alarming. Again, barring medical or distance issues, a married couple should not be withholding or avoiding intimacy with one another. By doing that, you open up temptation and could be setting up your marriage for a crisis.

Two things jump out from this poll. 1. Majority of married couples are experiencing intimacy as God intended. Within the boundaries of marriage and often. That’s a great result. 2. We still have over 480 couples, 44.3%,  that are in need of increasing that time of intimacy with one another.

It is important that a husband and wife take time to be one together. Scripture is clear. “Now concerning the things about which you wrote, it is good for a man not to touch a woman. But because of immoralities, each man is to have his own wife, and each woman is to have her own husband. The husband must fulfill his duty to his wife, and likewise also the wife to her husband. The wife does not have authority over her own body, but the husband does; and likewise also the husband does not have authority over his own body, but the wife does. Stop depriving one another, except by agreement for a time, so that you may devote yourselves to prayer, and come together again so that Satan will not tempt you because of your lack of self-control.”  1 Corinthians 7:1-5

We will begin to share some intimate counsel as well as articles from other writers to help to assist and for some, strengthen the intimacy in your marriage.

Remember, this is one facet of a Godly, Christ Centered marriage, but one that must not be neglected.

Is the word Divorce an immediate default word when there is conflict in your marriage? Begin to recognize what you say and think in your marriage, especially during disagreements and arguments. Stop and begin to listen to your spouse instead of attacking. #speaktruthinlove #noexit #joenkerry
Are you taking time to truly “listen” to your spouse? #emotinalintimacy #listentolisten #joenkerry
How do you reflect Christ in your marriage to those around you? #imitateChrist #holiness #joenkerry
Today we celebrate 31 years together as Husband and Wife…best friends, parents and grandparents. We met when we were just 17 and 19. Now, the memories of these past 3 decades are priceless. We are blessed beyond measure and continue to thank God for His Hand in our lives. It’s so very true when Jesus said, “Those who remain in Me, and I in them, will produce much fruit.” John 15:5