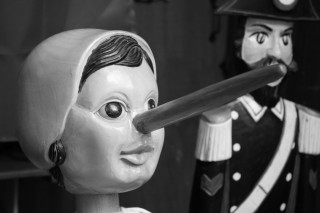 I am reposting an article by Dr. John K. Rosemond. The article is titled Lying Child.

Question: Our 7-year-old has always been a great, respectful, funny little kid. However, recently he started lying and become a little sneaky. We punished him by taking his television privilege away and making him write apology letters as well as apologizing over the phone to everyone he has lied to. We have explained to him that he is losing our trust and that we do not want to see this kind of behavior continue. Is this “typical” behavior for a 7 year old boy? What is an appropriate punishment and more importantly, how can we get him to stop?

Answer: You’re doing the right thing, as in having him apologize to those he’s lied to and suffer other moderate consequences.

It is not unusual for children to experiment with lying, usually in the form of fabricating stories that haven’t happened. More often than not, the child in question is otherwise well-adjusted, like your son. Let’s face it, children do odd things, some more than others. It’s the nature of the species. This is most likely just a passing phase, something he’s experimenting with, seeing if he can fool people and what sort of reaction he gets when the lie is discovered.

Along those lines, it may be that he has discovered that this gets a rise out of you. In that event, this little glitch might continue for a while no matter what you do. The bigger a deal you make of it, the worse it’s likely to get. The important thing is to be nonchalant about this as opposed to bent out of shape. Attitude is everything!

*About the Author: Rosemond has written nine best-selling parenting books and is one of America’s busiest and most popular speakers, known for his sound advice, humor and easy, relaxed, engaging style. In the past few years, John has appeared on numerous national television programs including 20/20, Good Morning America, The View, Bill Maher’s Politically Incorrect, Public Eye, The Today Show, CNN, and CBS Later Today.

Sometimes we just need to stop and truly assess where our focus is in our lives.
Take time to stop and pray for your children. For each of them to own their faith. To come to a knowledge of Who Christ is to them. To begin their journey, their walk with their Savior. Begin praying for them today! #prayer #children #faith #joenkerry